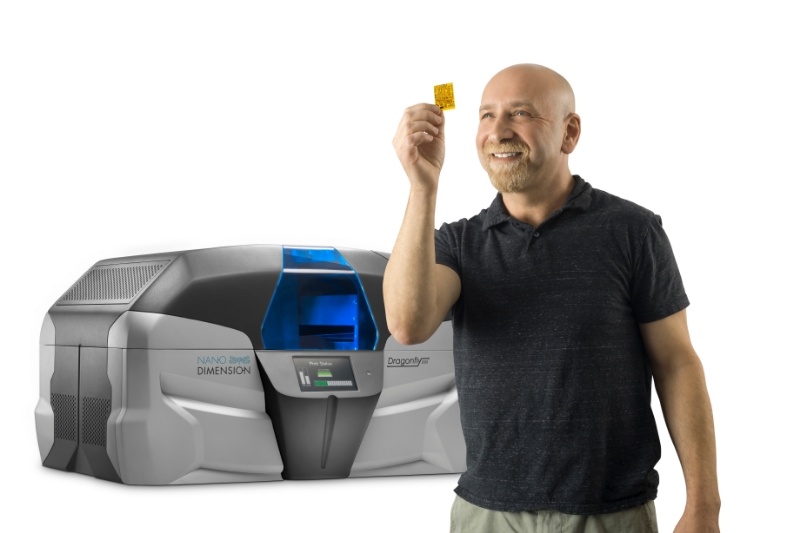 “For designers and engineers looking for ultra-rapid prototyping of PCBs, our 3D printer is a significant leap forward. The DragonFly 2020 3D Printer eliminates the frustration they face when they reach the prototyping and testing stage”

The capability of rapidly producing functional multilayer PCB prototypes using 3D printing is new to the printed electronics design and manufacturing industry. The current standard subtractive manufacturing of PCBs is a multi-stage, labor- and material-intensive process, and is so costly and time consuming that electronics designers requiring prototypes resort to outsourcing.

The DragonFly 2020 3D Printer is a three-axis inkjet printer; its benefits and attributes include:

“For designers and engineers looking for ultra-rapid prototyping of PCBs, our 3D printer is a significant leap forward. The DragonFly 2020 3D Printer eliminates the frustration they face when they reach the prototyping and testing stage,” said Simon Fried, Chief Marketing Officer at Nano Dimension. “Moving their work from design to a prototype at an off-site printing facility might take weeks for the PCB to be ordered, produced and shipped. If further iterations are needed, it’s back to the prototyping house for another cycle.

In today’s competitive electronics markets, unforeseeable and costly delays during PCB development can significantly slow time-to-market. That’s the development risk and bottleneck that we’re eliminating with the DragonFly 2020.”

The DragonFly 2020 3D Printer is targeted for commercial availability during the second half of 2016. The AgCite conductive inks are available today.

Nano Dimension trades on OTCQX® Best Market in the U.S. and on the TASE in Israel. U.S. investors can find current financial disclosure and Real-Time Level 2 quotes for Nano Dimension on http://www.otcmarkets.com/stock/NNDMY.

This press release contains forward-looking statements. Words such as “expects,” “anticipates,” “intends,” “plans,” “believes,” “seeks,” “estimates” and similar expressions or variations of such words are intended to identify forward-looking statements. These statements are only predictions based on Nano Dimension’s current expectations and projections about future events. There are important factors that could cause Nano’ Dimension’s actual results, level of activity, performance or achievements to differ materially from the results, level of activity, performance or achievements expressed or implied by the forward-looking statements. Those factors include, but are not limited to the impact of general economic conditions, competitive products, product development risk, product demand and market acceptance risks, reliance on key strategic alliances or fluctuations in operating results. Except as otherwise required by law, Nano Dimension undertakes no obligation to publicly release any revisions to these forward-looking statements to reflect events or circumstances after the date hereof or to reflect the occurrence of unanticipated events.